So, in a rare move, I took a request from a good friend to build him the M-76 Revenant assault rifle from Mass Effect 2 and 3. It’s best known for it’s appearances as the weapon of choice for the Shadowbroker in the Lair of the Shadowbroker DLC, and the warden of Purgatory, Kuril. It also appears as a decorative item in Morinth’s apartment in Mass Effect 2, on Omega.

The rifle is characterized in the games as the ultimate choice of the most wealthy warlords. It’s also the only weapon I can recall with actual, fighting recoil (other than the much later released Hurricane). The scale I built it to, the rifle clocks in at a relatively massive 34″ from stock to barrel tip. That said, the foam once again has proven invaluable, keeping it light enough to carry around a convention hall without issue.

We start, as most of my builds do, with the barrel’s main body. I decided to stick to hollow-core building for as much of this gun as possible; the Claymore already pushed weight a little higher than I wanted, and it wasn’t nearly as big. There was a slight issue though; the large angle cut specified int he design mandated a thicker top side, in order to maintain structure. I glued two slices together, but found it too cumbersome, and would make my plan for the barrels not work as well as I’d like, so I sliced off half of one piece with the band saw. 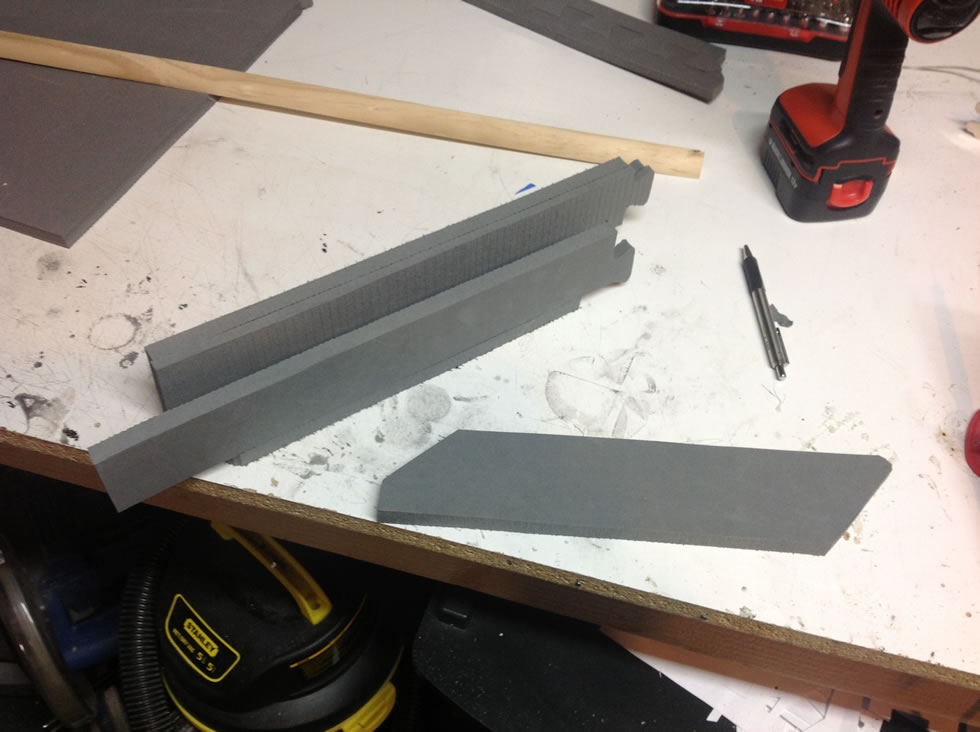 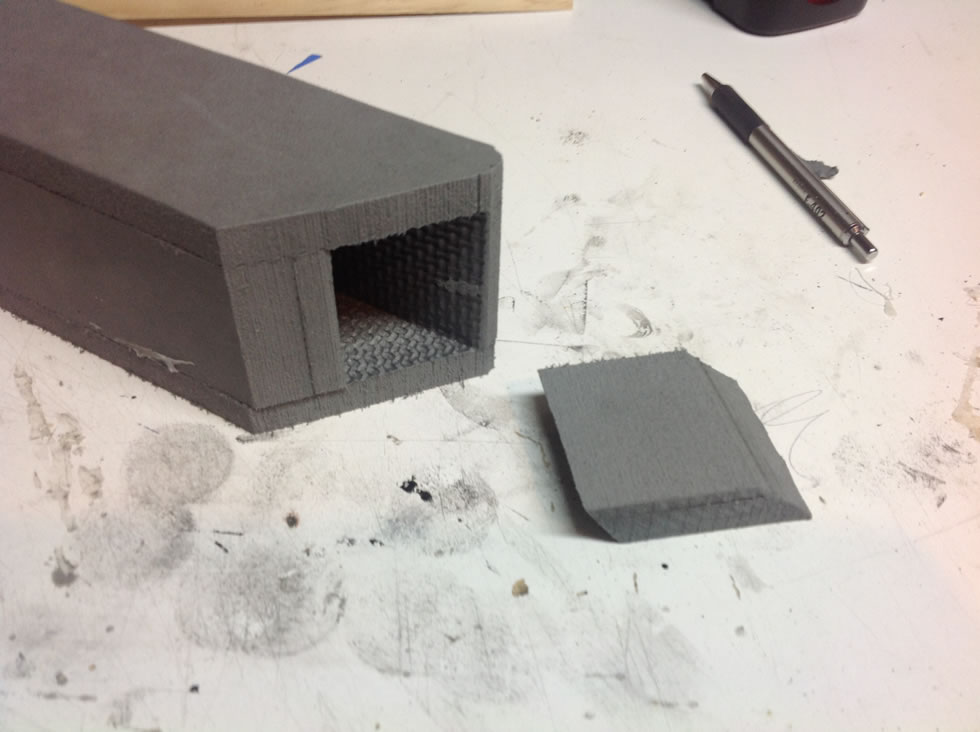 I wanted to make sure I got as clean of a seam as possible with the ends, so I cut a slight wedge shape into the piece to fill it, ran a bead of glue around the outside, and put it in. After that, a quick run through the band saw gave me a nice, clean end. 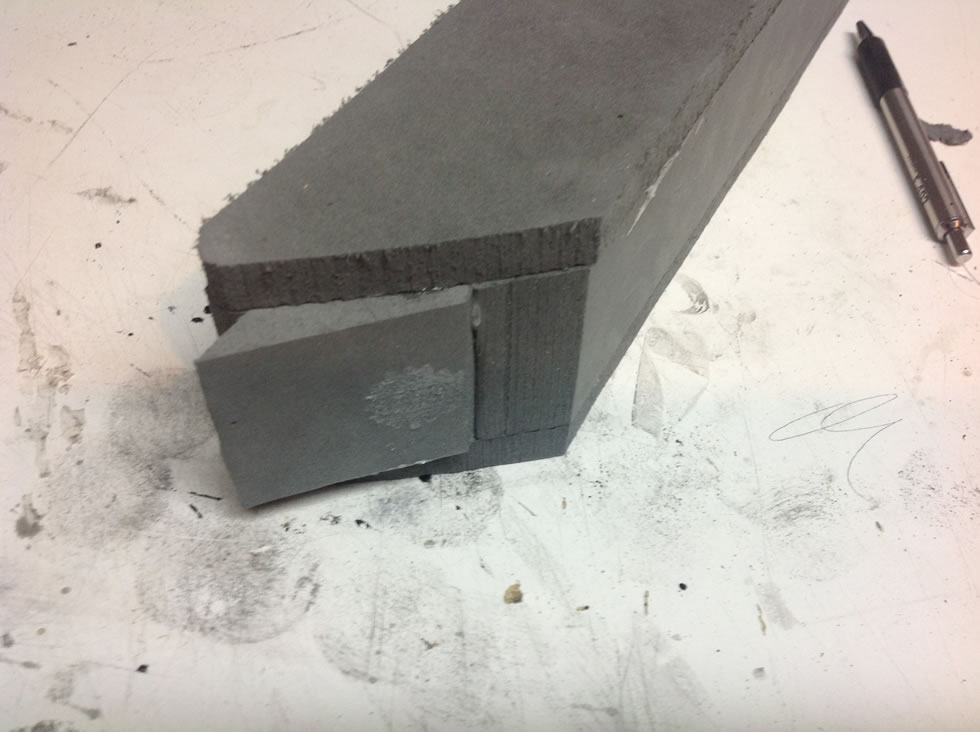 From there, I moved onto the little wings, a common feature of Mass Effect weapons (dammit). I took a bit of scrap from the top mentioned earlier, equated to 1.5 thickness EVA, and used that. The thickness was perfect, and gave me ample room to carve the vents and such in the piece. I followed up with a piece of balsa plywood wedged into a slice made with a Dremel cutting wheel to form an attachment system. Voila. 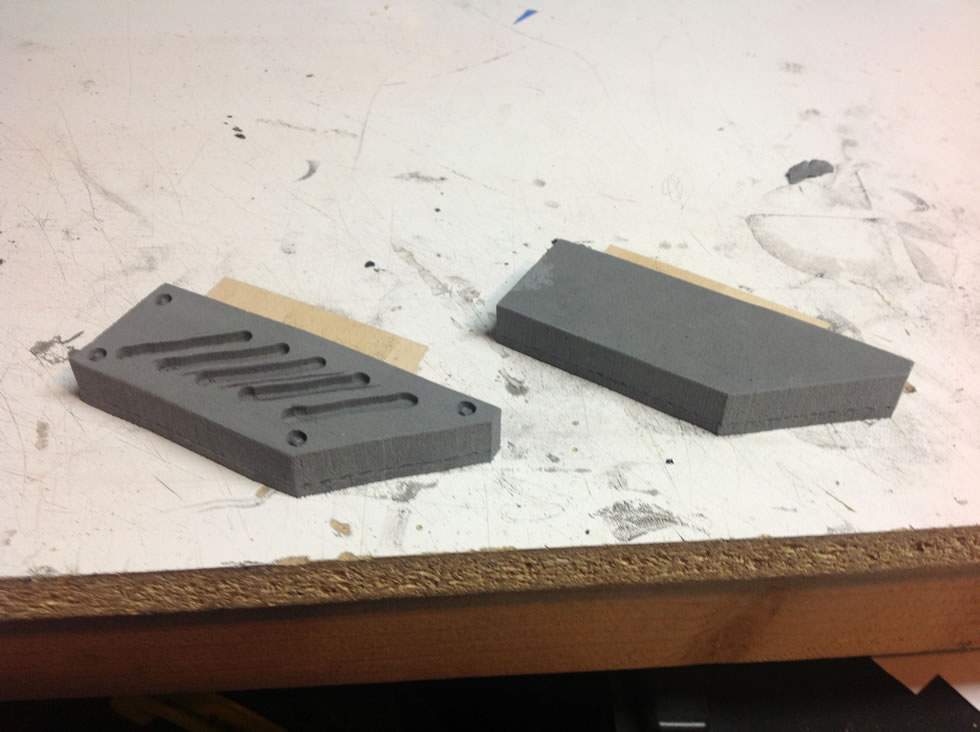 I followed that with a corresponding slot on the gun’s body, and fitted them easily. They had enough grip to stay locked in, without causing bends or odd placement. I’ll glue them for the final assembly, of course, but for now, this will do.

I then moved on to cutting the vents in the piece, complicated by there being half of them on the 45 angle cut. This was pretty simple though, as my new Dremel 4000 had a hand grip attachment, which despite my initial worries of stability, proved more than capable of keeping the powerful tool under control. The vents were cut without issue. 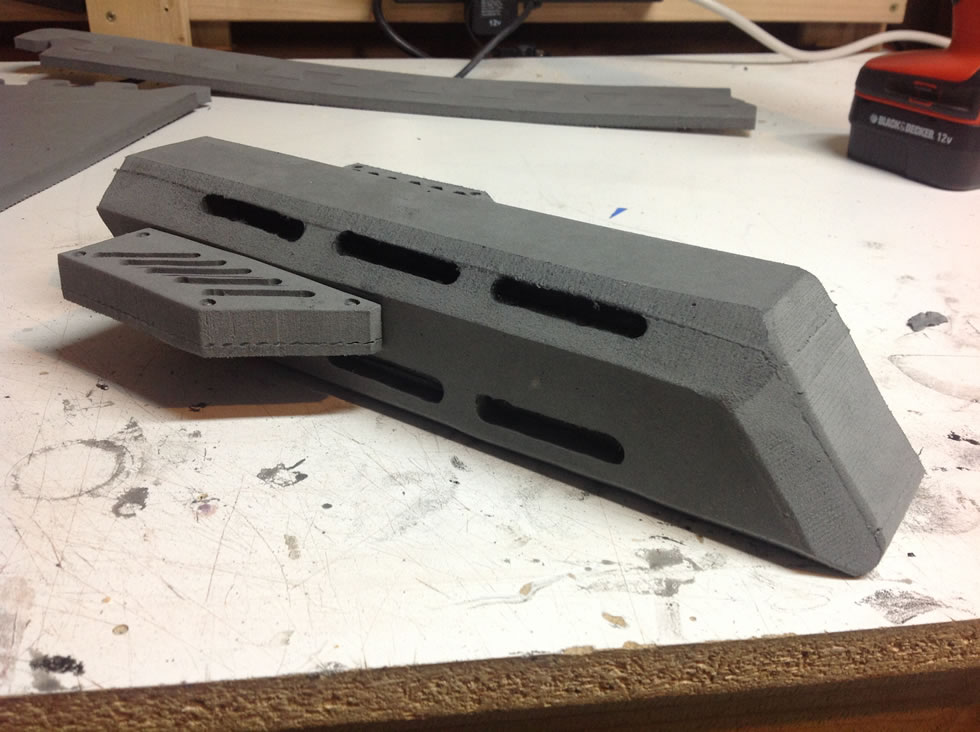 Moving along, I repeated roughly the same process for the main body of the gun, with one addition: Small pieces of wood forming additional structural support, since this piece would be under the most stress (holding up the weight of the front end). I had thought of screwing it shut on one side, but this turned out to not be an option, there was simply not enough rigidity to the piece, and it wobbled a lot even just under the weight of the existing parts of the gun. I elected instead to glue it all shut, and simply revisit it after painting and cut an access slot in the bottom. More work, but it will look and hold up better. 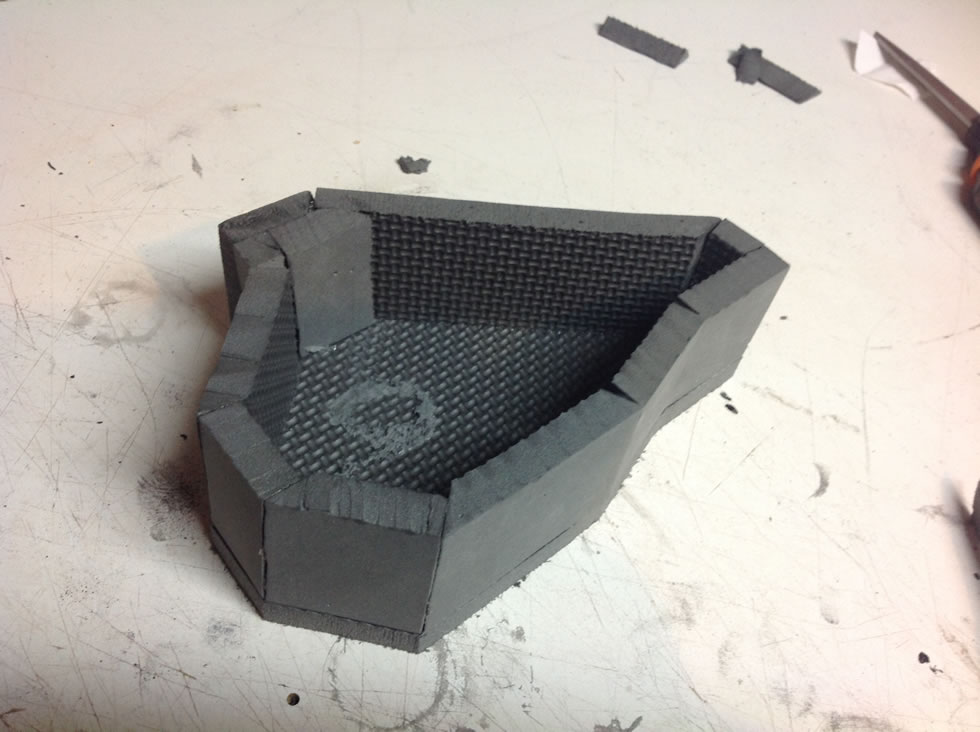 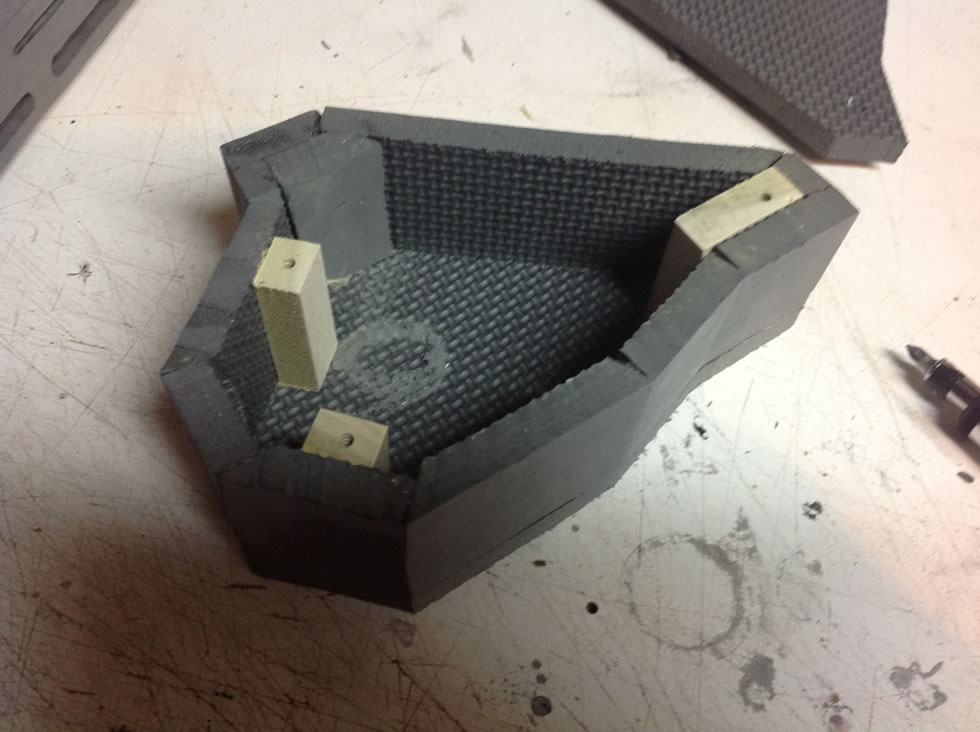 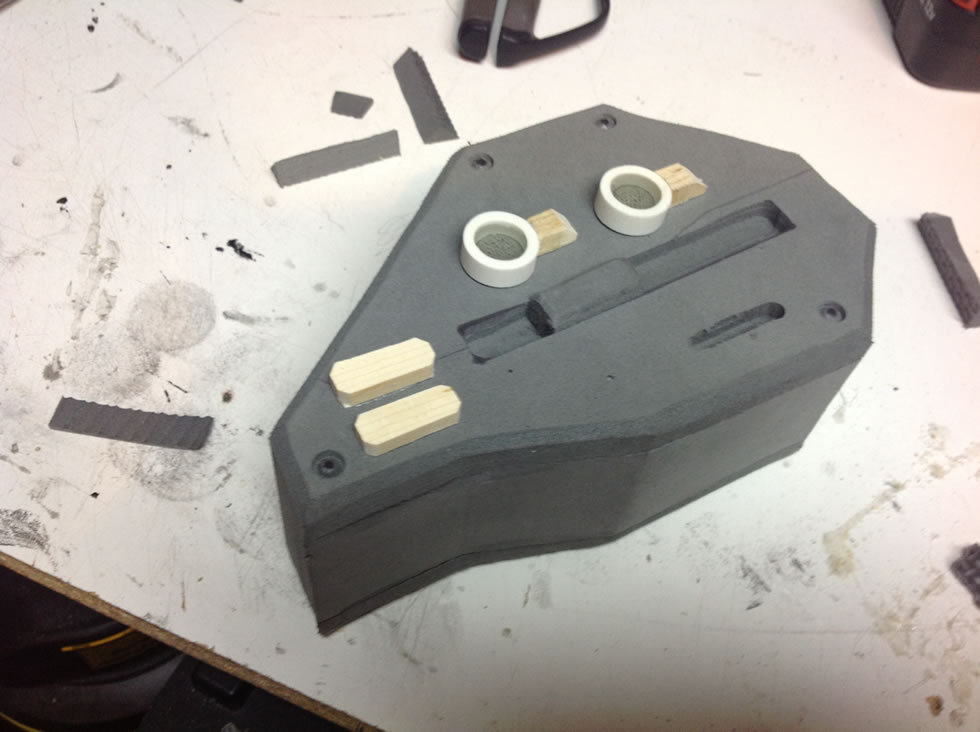 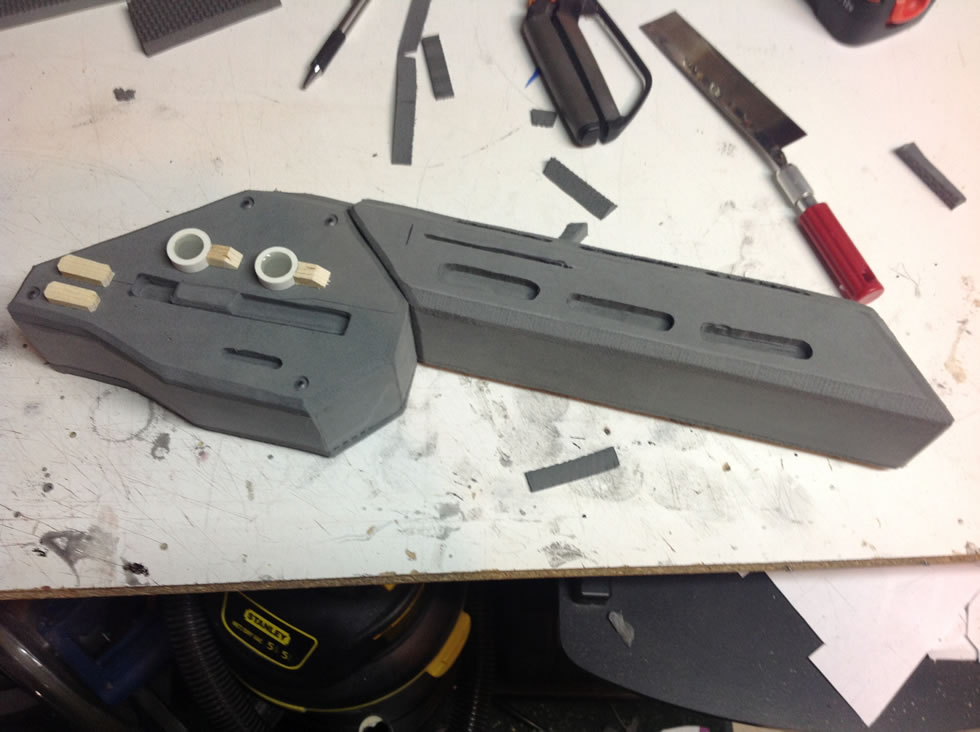 I kept the pace going by adding the various control pieces to the part, the two switches and other bits. I make these out of small pieces of scrap wood, since they project from the gun and are more prone to abuse than the foam body. Combined with some PVC pipe, I then had the issue of how to attach them. I simply sat them in their spots, put a little tape down to keep them still, and filled the inside of the pipe with hot glue. This simultaneously attached them, and also gave the switches a slight concave shape on the inside. 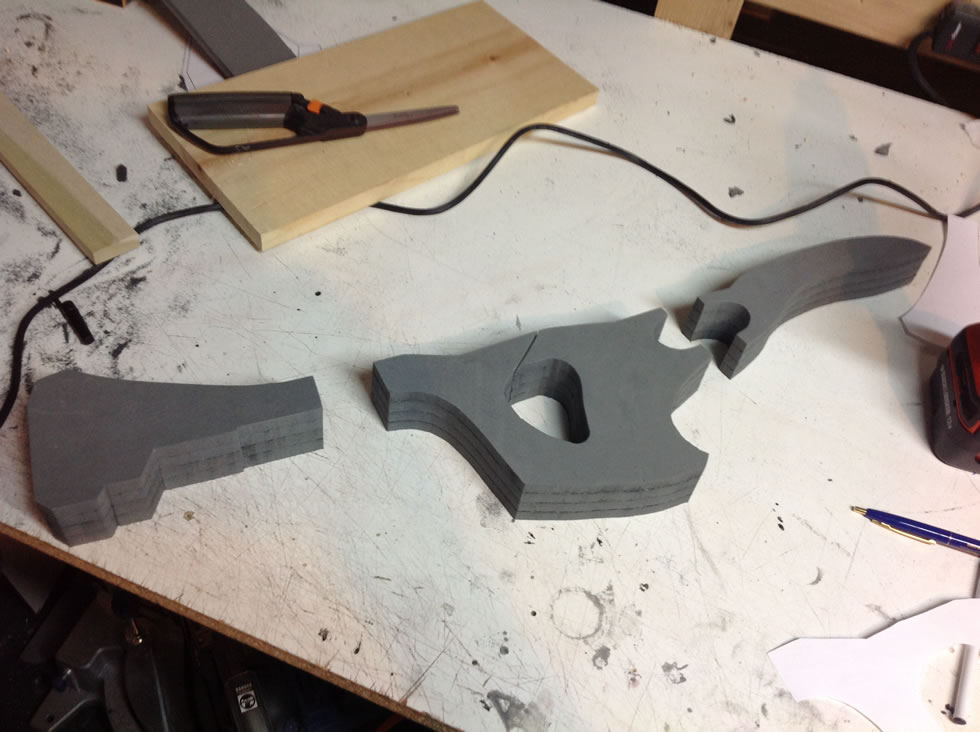 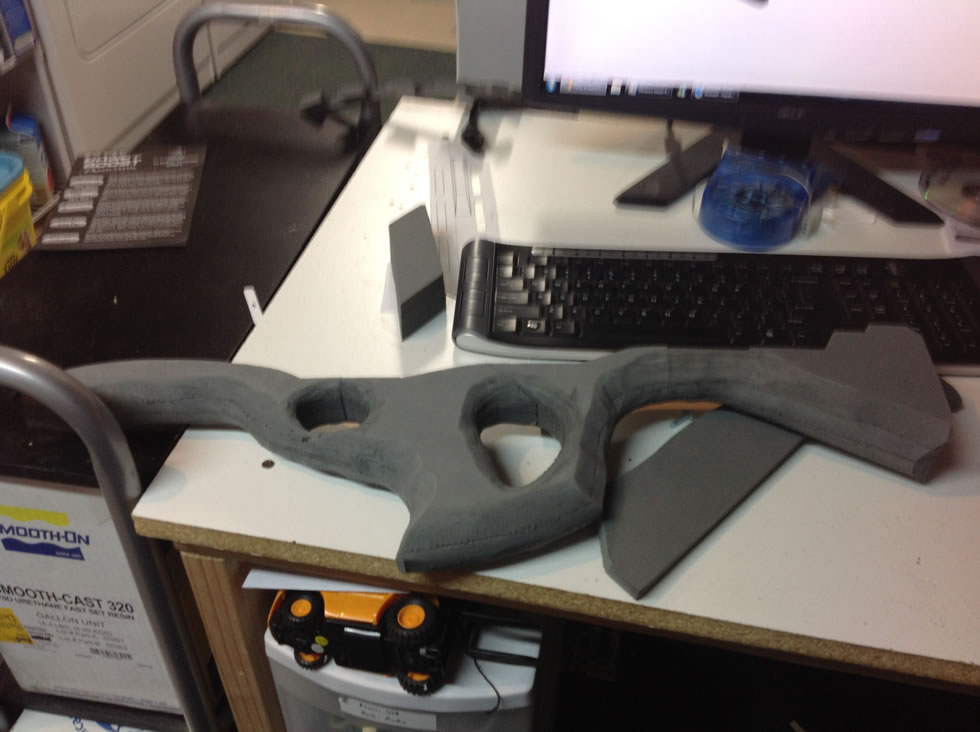 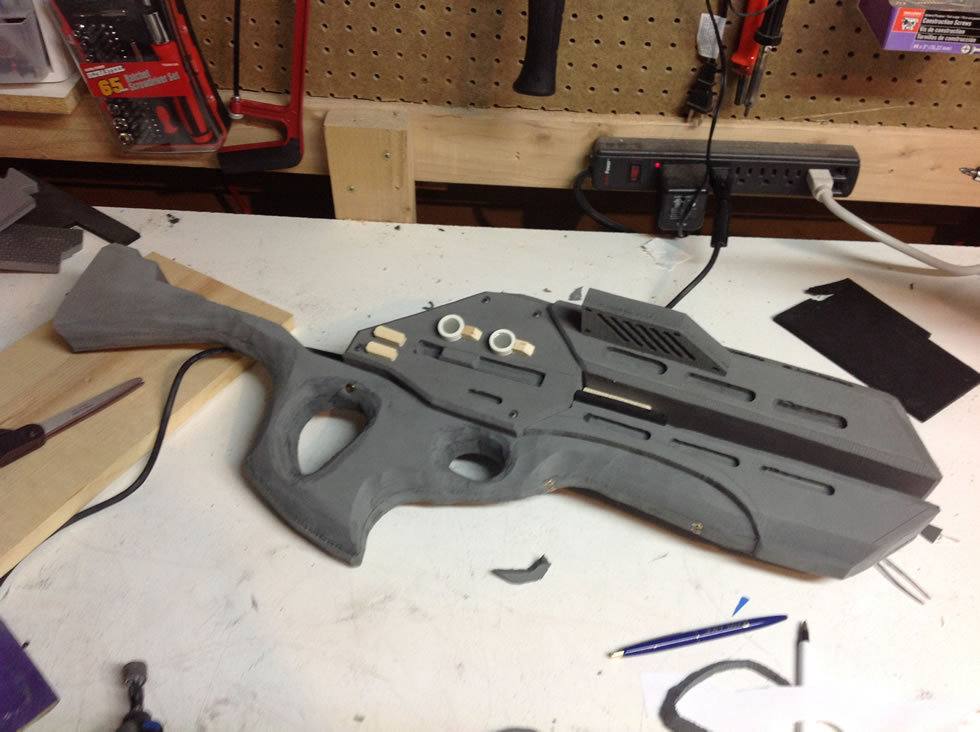 Next, the grip. I cut it as one solid piece, to keep the shape consistent, then cut it into three pieces by itself, to cut the inner sections out. Then I re-glued everything back together, and began carving, starting with the hot knife. I’ve done this before, but I have to say, this one was a much bigger undertaking, it took almost an hour of knife cutting, Dremel grinding, and finish sanding to produce what you see in the second photo. After that, it was a pretty standard screw job into the frame of the gun, and bam, it’s now able to be held. 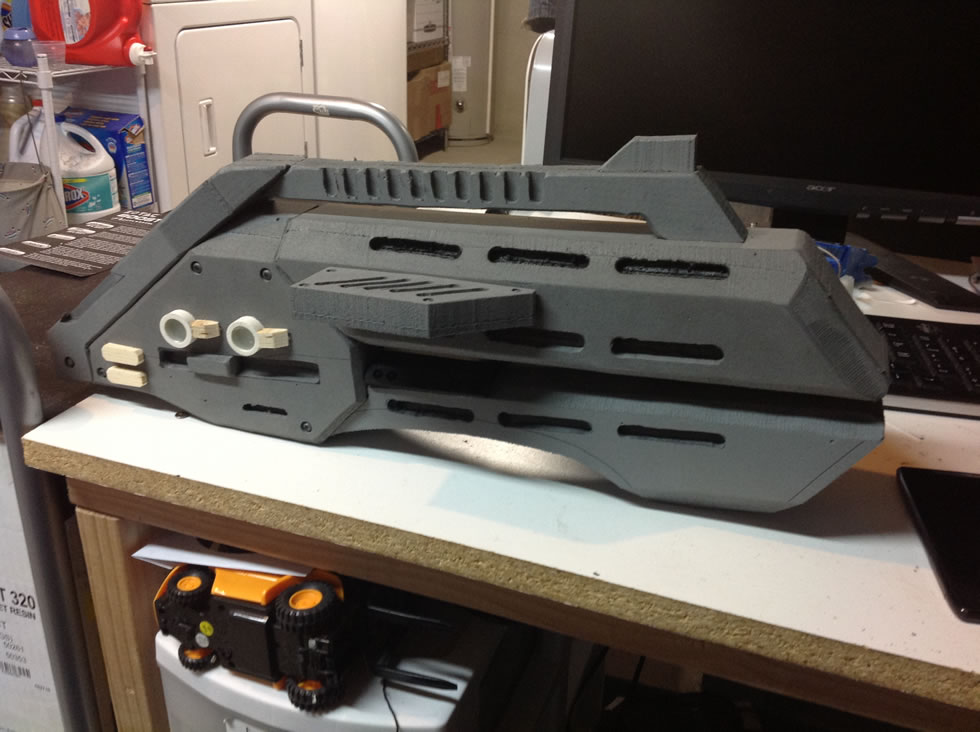 Moving along, I removed the grip once more and tackled the remainder of the stock and detail work. Thankfully, what I thought was an even bevel on level with the barrel cut was not on this piece, it was actually at a convenient 45 degree angle. This meant instead of jockeying the piece through the saw, carefully, holding it on it’s tip at an angle, I just had to slide it through on the backside. This one, and the one behind it, were made solid, as I traditionally do, to help offset the weight of the barrel. More Dremeling and sanding, and we keep the build going. 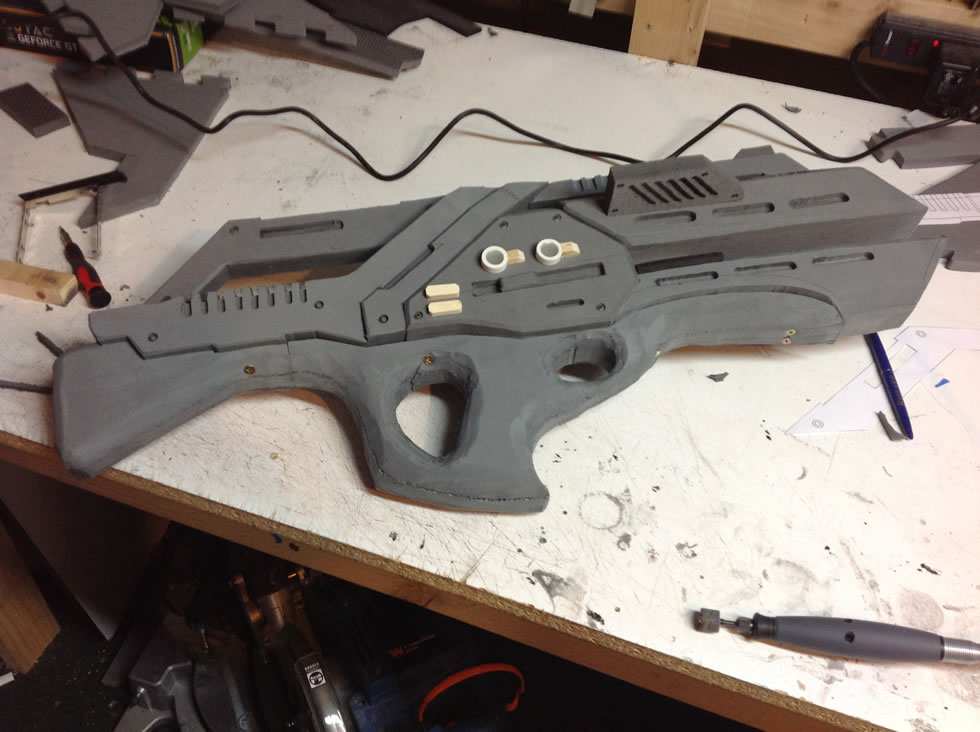 Sorry for the big leap forward, I forgot to take pictures, heh. As said, the other piece of the stock there, with the vents, is also solid. When you hold it in the middle, your hand acts as a fulcrum, meaning the weight of the heavy barrels will pull the front down and make it awkward to carry. To attempt to offset this, the back end is solid EVA. Not a lot of weight, but enough to offset a bit of wood and PVC. 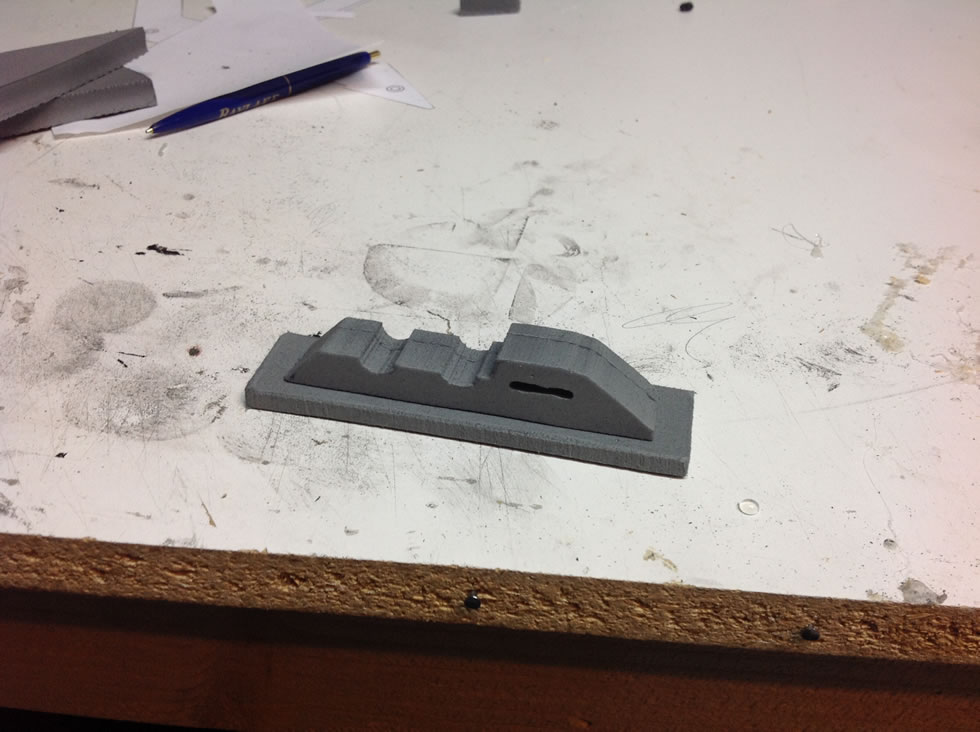 This little bit was the last part fabricated, it makes up the top detail of the stock. I don’t really know what it is, but whatever, there it is. It was an interesting shape to be sure, and the base had to be just slightly wider than the rest, which made it somewhat interesting to make.

Afterward, I tackled the barrels, a simple set of 3/4 inch PVC pipes, cut at a 45 degree angle. I wanted to avoid the troubles of the past with the seams not looking good, so in this case, I inserted a small piece of 3/4 inch oak dowel into the pipes at the end, and carved a corresponding hole in each barrel section.

After that, I joined the two barrels as required with a piece of 1″ PVC pipe, and a small bit of scrap wood, glued and sanded to perfection. I slid it in, which required a little stretching of the foam (by design,) and we’re done with construction. 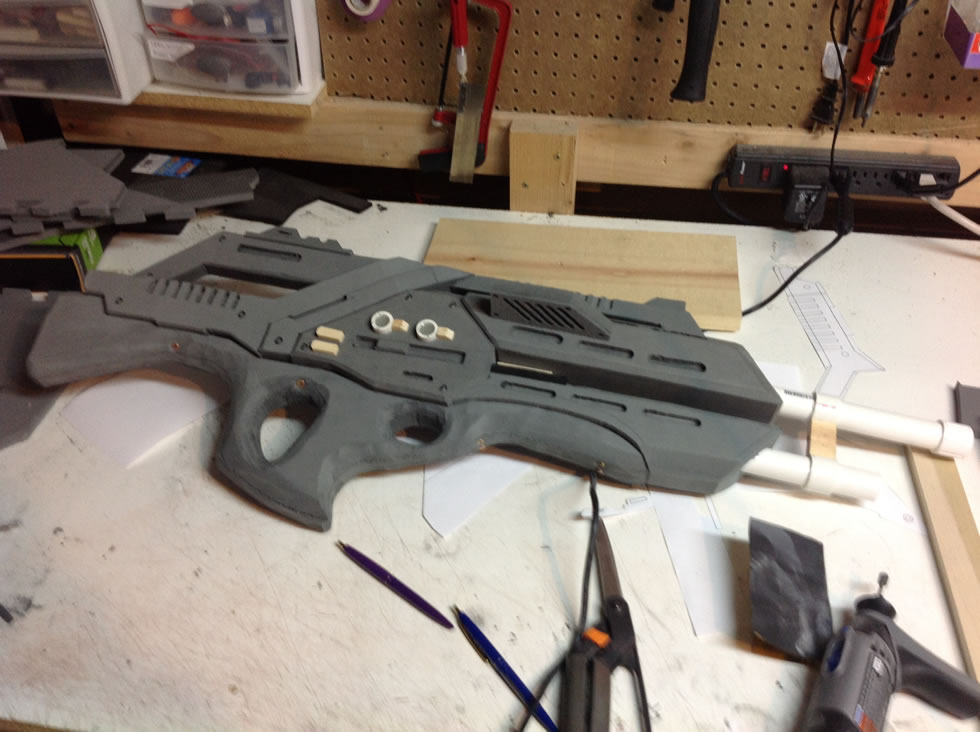 That’s all for now, check back when the warmer weather arrives for the paint work!